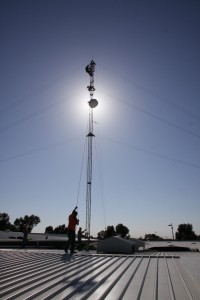 Northern Health has operated a wireless backbone between its key hospital systems for many years. The second generation systems delivered only 100 Mbps between its sites in the North of Melbourne.  While very reliable the systems did not have the capacity to cope with the increased traffic requirements. Northern Health engaged DyCom to upgrade the system capacity while allowing for some further growth in the future.

After discussing several design options Northern Health gave DyCom the approval to proceed thus selecting the Aviat Eclipse platform for its new equipment. DyCom used the Aviat Networks ODU 600 and the Eclipse IDU GE3 indoor switches. The new systems deliver up to 3 times the original capacity and can be upgraded to deliver up to 500 Mbps.

The project was quite complex to implement as DyCom had to minimise downtime of the existing systems while the new hardware was deployed. However all the planning payed off as the deployment went all as planned and downtime was minimal.

The systems connect the Northern Hospital in Epping with the Craigieburn, Bundoora, Broadmeadows, Preston and the Royal Melbourne hospitals and support voice, data and video applications.